Exactly 70 years are passed away from the first edition, in the year 1949, of the Coppa della Toscana that the Florentine CAMET (Club Auto e Moto d’Epoca Toscano) decided to re-enact every year and that is reaching its 24th edition on 2019. This year the Coppa Toscana will bring the classic cars in the Chianti landscapes and in the most fascinating scenarios of Florence.

Among the so many classic car events, the re-enactment of the Coppa Toscana marked its own relevant rank for the search every year of new landscapes, tastes and experiences for the participants who come from every part of Italy and from abroad, many of whom are habitués of the event that is included in the calendar of ASI (Automotoclub Storico Italiane) association since 1996.

The re-enactment of Coppa Toscana organised by CAMET recalls one of the most famous road races of the post-war period – the Coppa della Toscana – that crossed the “Granducato of Tuscany” in the years 1949 to 1954.

The re-enactments has been really appreciated since the beginning for the great care of the organization and the importance of the cars that are attending. The event has been rewarded several times by the ASI with prestigious awards such as the Manovella d’Oro and ASI Special Awards. The 2018 edition received the prestigious Special Encomium from the President of ASI, Maurizio Speziali.

The 2019 edition will begin with the registrations in the afternoon of Thursday, April 25th at the Hotel Conference Florentia in Florence. Friday is dedicated to the Senese Chianti, with visits to the cellars and exhibition of the cars inside the walls of the village of Monteriggioni and lunch in the “Piccolo Castello”, a traditional refreshment stop for the Mille Miglia.

For the gala dinner the historic restaurant “La Loggia” was chosen, at Piazzale Michelangelo, a magnificent terrace overlooking the city of Florence. Saturday will be the turn of the roads and landscapes of the Florentine Chianti, with a visit to the monastery of San Michele Arcangelo a Passignano, a grandiose fortified monastic complex and visit to the Macchiavelli house with lunch in the restaurant “Albergaccio del Macchiavelli”, where the awards and greetings will take place.

For the enthusiasts of the chronometers  there will be several time-speed-distance trials valid for the XXIV Coppa Toscana rank.

During the event the pressure switches will be also in action for the Alessandro Ercoli Trophy, now in its fourteenth edition, which honors one of the pioneers of Italian historic motor racing and passionate about the cars produced by the Florentine manufacturer Pasquino Ermini who rivaled Ferrari and Maserati in the post-war years.

PROGRAM OF THE EVENT

The hotel is 500 meters from the “Firenze Sud” exit of the motorway Autosole
Check-in  at the hotel.

Possible parking of the trailers, if needed
technical checks
road book delivery and registration of participants

8.30 am – Departure “via Chiantigiana”
Time-speed-distance trials in the park of the Hotel

12.00 – Arrival in the ancient square of Monteriggioni (the shape of its walls is the same used to draw the crown of the lady who represents the Republic of Italy) – Aperitif

1.00 pm Lunch at the “Piccolo Castello” (traditional stop during the Mille Miglia)

“Pit-stop” in the Hotel and departure for a “parade” with our cars in the old town of Florence. Arrival in the Piazzale Michelangelo ed exhibition of the cars.

Rest in the Hotel

9.00 am – departure
The roads and landscapes of the Florentine Chianti

Time-speed-distance trials in the park of the Hotel

10.00 am Visit of the monastery of San Michele Arcangelo in Passignano (a grandiose fortified monastic complex)

11.30 am Restart in the direction of the “Albergaccio del Macchiavelli”

Time-speed-distance trials during the course

12.30 pm – Arrival at the Machiavelli (Secretary of the Florentine Republic) ancient home  (www.villamachiavelli.it) – Visit of the museum

The program of the event : It is interesting to remember the origins of the Coppa della Toscana, road speed race organized from 1949 to 1954.

The story begins with the first post-war Mille Miglia that was organized, in understandably precarious conditions, in 1947. The winner was the Florentine by adoption Clemente Biondetti. The following year, however, the organization decided not to permit that the most famous road race in the world pass through Florence.

Thus the idea of organizing a race in the “Granducato di Toscana” was born in the minds of the leaders of the Automobile Clubs of the cities of Toscana, which, even if it did not have significant precedents, could compensate for the disappointment suffered.

This event had the name of the Coppa della Toscana.

So on the morning of July 31, 1949, the eighty race cars started the run,  of which only half arrived at the end of a long and selective journey. The winner of the first edition was the Paduan driver Ugo Bormioli, on a Fiat 1100 Sport prepared for the occasion by the Florentine “magician” Pasquino Ermini.

In 1950, the Mille Miglia returned to pass thought Florence, but the success of the Coppa della Toscana race, born as an “alternative” race, was such that it was repeated again in that year and in subsequent years, until 1954.

The Coppa della Toscana was thus reborn in 1996 as a “historical re-enactment”, thanks to the passion of CAMET members. 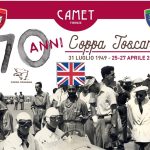